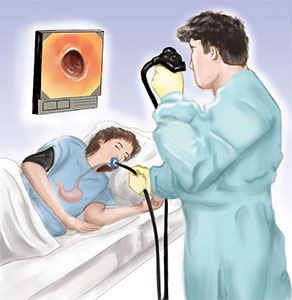 After checking the bacteria, doctors do endoscopy of the patient. Endoscopy is a process wherein the internal parts of the body are seen with the help of an endoscope. The endoscope is a thin, flexible tube with the camera on one end. With the help of which the pictures of the inner parts of the body are seen on the computer screen. In the case of peptic ulcer, it is inserted inside the body through the mouth or through anus. It is used only without the unconscious of the patient.

With the help of endoscopy, the following things are checked-

If a person is more than 55, then his endoscopy must be done. Because there is a risk of stomach cancer at this age. If any one has the following symptoms then it becomes necessary to check-
Other investigations to identify peptic ulcer –
Fake octal blood test (FOBT) – By this test, blood is checked in the stool, because it is pointing to peptic ulcer and other serious problems like stomach cancer. Peptic ulcer can not be confirmed only from FOBT, but if the internal bleeding has occurred due to ulcer, then FOBT gets its information.
Full blood count (CBC) – If the internal bleeding has occurred due to ulcer and the patient has anemia, then its blood is checked.
Upper GI series – In this test, esophagus and stomach X-ray are done. But this test is rarely used.
Post Views: 237