Skip to content
HIV HIV and AIDS
The doctors around the world have been collecting information about Human Immunodeficiency Virus (HIV) for three decades, and in these years more than 30 million people have lost their lives due to AIDS.

HIV was first seen in animals in the early 19th century. It is believed that it came from chimpanzees in humans. In 1959, HIV virus was first found in the blood sample of a sick man from Congo. It is believed that it was the first HIV infected person. AIDS was identified in 1981. Los Angeles’s doctor Michael Gottleib found a different type of pneumonia in five patients. In all these patients, the disease fighting system suddenly became weak. These five patients were gay, so in the beginning the doctors felt that this disease was only in homosexuals. That’s why AIDS was named as a grid ie Gay Retaliated Immune Deficiency. Later, when other people also found this virus, it was discovered that this belief is wrong. 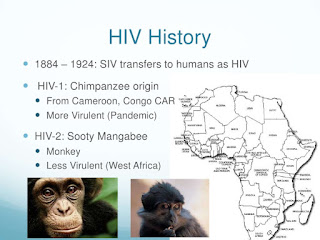 In 1982, the name of the grid was changed to AIDS i.e. Acquired Immuno Deficiency Syndrome. In 1983, two scientists from the Pasteur Institute of France, Luke Montgonier and François Barre Sinuci, discovered a virus from the swollen lymph gland of AIDS patient, which he called lymphadenopathy-associated virus. A year later, US National Cancer Institute (NCI) Robert Gallo discovered the HTLV III virus. In 1985 it was discovered that these two are the same virus and spread AIDS. For the first time in 1986, the name of the HTLV-III / LAV virus was changed to HIV, which means Human Immunodeficiency Virus.

By the end of 1986, there were enough cases of AIDS in around 85 countries. Till then, in the report of the World Health Organization, it was found that there are approximately 38,401 patients with AIDS in the world. 2,323 in Africa, 31,741 in the US, 84 in Asia, 3,858 in Europe, and 395,30 people in Oceania were found to be suffering from AIDS. In February 1987, WHO presented a program to spread awareness about AIDS among people. Since then, campaigns for spreading awareness began with AIDS in people around the world. The use of condoms has not only been seen for family planning, but also for the prevention of AIDS. Every year since December 1 every year it is celebrated as World Aids Day.

Like the malaria and TB, the United Nations named AIDS as a pandemic. According to the World Health Organization data, by the end of 2012 one million people are getting antiretroviral therapy. But the remaining one crore 60 million people are deprived of it. Most people do not understand that AIDS can be avoided if the virus is started in time. That is why it is very important that awareness of this disease is spread to as many people as possible.