Skip to content
AIDS HIV HIV and AIDS
HIV (Human Immunodeficiency Virus) is a member of the retrovirus family, which gradually weakens humans by attacking the immune system. The reason for having an acquired immunodeficiency syndrome (AIDS) in humans, this is the HIV virus. With the weakening of the human immune system, the risk of such type of infection (optical inflection) increases, and it is so dangerous that it also causes death. 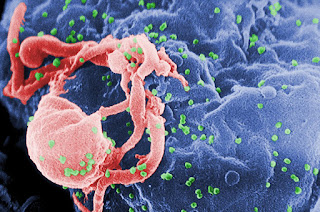 In our body, mainly two types of T-cells are found, the first T-4 cells, also called CD4 or Helper cells, and the other T-8 cells, which are called CD8, Suppressor Cells or Killer Cells . These are called killer cells, because it destroys cancer cells or viruses infected cells.

When a person is infected with HIV, the number of CD4 cells decreases in his body. This is because AIDS viruses are added by going with these CD4 cells and then when these cells are divided to fight infection, then along with these, AIDS virus also splits, increasing its number. Thus HIV spread to the whole body of the patient. If the person’s treatment does not start early, then the cells of CD4 begin to decrease in his body. For this reason, its immune system becomes weak and it also increases the risk of other infectious diseases. The person always seems to be sick.

To calculate these CD4 cells, CD4 cells are counted in blood per milliliters. In a healthy person’s body, every 800 ml of blood is available from 800 to 1,200 CD4 positive T cells. When someone is infected with HIV, the number of continuous CD4 positive T cells in the body starts decreasing. When this number falls below 200 / mm3, it is said that the person has AIDS and it is more prone to opportunistic infections, cancer, etc.

AIDS is the most advanced stage of HIV infection. In patients suffering from AIDS, infections in the intestinal tract, lungs, brain, eyes and other organs as well as constant weight loss, diarrhea, nerve problems and cancer like: Kaposi’s sarcoma and lymphoma The risk of being increased.

Many scientists believe that HIV from AIDS directly attacks CD4-positive T cells and prevents them from doing normal work. That is why the person’s immune system is weak. For example, the person infected with HIV has damaged signaling molecules that control immune responses, so that the person’s body’s ability to fight with diseases also decreases. In the body of patients suffering from AIDS, due to HIV, limbs associated with lymph nodes and other immune systems suffer from damage, and due to damage to these organs, their immune system weakens and they also become easily infected is.