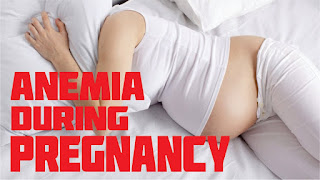 Anemia occurring during pregnancy can be done by many, such as: –

Anemia due to iron deficiency – Iron deficiency during pregnancy does not produce enough amount of hemoglobin in the body, which causes anemia. This is the reason that red blood cells contain the amount of protein, which provides oxygen to the lungs and provides the body so that the body produces energy to function.

Blood in anemia due to iron deficiency can not take enough oxygen so that the body tissues should not get as much oxygen as they should. Iron deficiency is the most common cause of anemia in pregnancy.

Foliate deficiency is called anemia-folate itself as folic acid, which is a type of vitamin B. The body needs folate to produce new cells, including healthy red blood cells. Women need additional folate during pregnancy, but sometimes this folic acid is not available to women in adequate amounts from their diet. In such a situation, when folic acid did not produce sufficient amounts of red blood cells, the body tissues could not get sufficient oxygen.

During pregnancy, folate deficiency in the mother’s body can also give some birth defects to the child having it. For example, neural tube abnormalities (spin Bifida) or loss of child’s weight since birth.

Anemia due to vitamin B12 deficiency – The body needs vitamin B12 for healthy red blood cells during pregnancy. A pregnant woman needed Vitamin B 12 when her vitamin could not get enough of her vitamin from her diet. In this state, the body is unable to produce healthy red blood cells. Women who do not include meat, egg and dairy products in their diet, they lack Vitamin B12. Not only this, it also promotes birth defects such as neural tube abnormalities and immature delivery.

Lack of blood during labor can also be a cause of anemia.