Skip to content
HIV HIV and AIDS
Raptors are the also Transmission media of HIV virus. When HIV, two copies of RNA, joins the CD4, then the process of infection begins. These types of cells are called CD4-positive cells.

One or two gp120 molecules present in the virus are connected reliably, on the surface of CD4 cells. In this process viral envelope present on the surface of the second chorreacester molecule and HIV present in human cells is added. By joining both the virus’s genetic substances (RNA), proteins, and enzymes enter into the human cell. 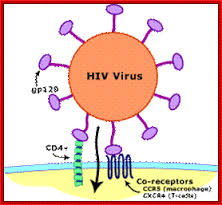 In the recent study, several choreceptors of different HIV strains have been discovered. Many of these new medicines are being made for the treatment of HIV by these choreceptors. In the beginning, in addition to HIV, CD4, viruses use CCR5 receptors to enter target cells. As the disease spreads, the virus also uses the CXCR4.

Although CD4 + T cells are the main target of HIV, but other immune system cells whose CD4 is present on the surface, they all become infected with HIV. These include long-term living cells such as monocytes and macrophages. These cells contain very high amounts of this virus and the virus remains in the living stage. Along with CD4 + T cells, this virus is also abundant in all these cells. All these cells contain very small amounts of virus in stable, and inactive condition. When the immune system is active, then all of these cells become active and form new HIV virus (virion).

When CD4 infected cells are joined with healthy cells, then HIV virus gets from one cell to another. In this way, it spreads to all parts of the body.