Skip to content
peptic ulcer Stomach diseases
Peptic ulcer is a disease related to digestive tract. When the digestive enzymes begin to produce excessive amount of food in the body, it starts to develop wounds in the stomach and intestines. If this ulcer is in the stomach, then it is called gastric ulcer and if it is in the upper part of the small intestine it is called dudenam ulcer. 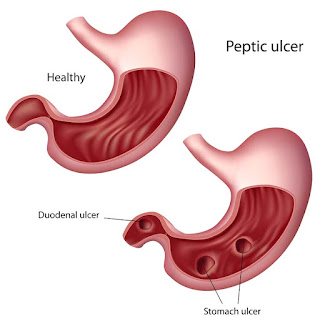 The main reason for having peptic ulcer is the consumption of non-steroidal anti-inflammatory drugs such as aspirin and Brufen etc. for long periods of time. Often peptic ulcer disease is more common in people who use pain-less drugs. Apart from this, those who have a history of peptic ulcer in the family also have more chances of it. It was believed that a person drinking spicy food, caffeine and a little alcohol also gets peptic ulcer, but this is not true. A person who drinks excessive amounts of alcohol and smokers has ulcers. If low amount of alcohol is consumed, it does not cause ulcers.

The most important reason for frequent ulcers in the stomach and small intestine is the bacteria called Helicobacter pylori. The transfectionary bacteria are also called H. pylori. This bacteria reaches the stomach with contaminated food. Its symptoms, pain in upper-middle part of the stomach, and vomiting, and black colored feces are accompanied.

Often people over 50 are complaining of peptic ulcer.

Excess amounts of acid in stomach

When the digestive acid (hydrochloric acid and pepsin enzyme) starts to produce excessive amounts in the stomach it starts damaging the stomach and intestinal walls. Because of which there are wounds there. Although spicy food does not cause ulcers, but if ulcers are already there, then it can worsen it more.

If someone has a history of having peptic ulcer in their family, then the generation of their fire also has full potential for peptic ulcer.

A person with kidney, liver and lungs is more likely to have peptic ulcer.

Some of these risk factors are such that can be controlled, but there are some factors that can not be controlled. So if anyone has this risk factor, then in this regard, he should meet the doctor and gather information.